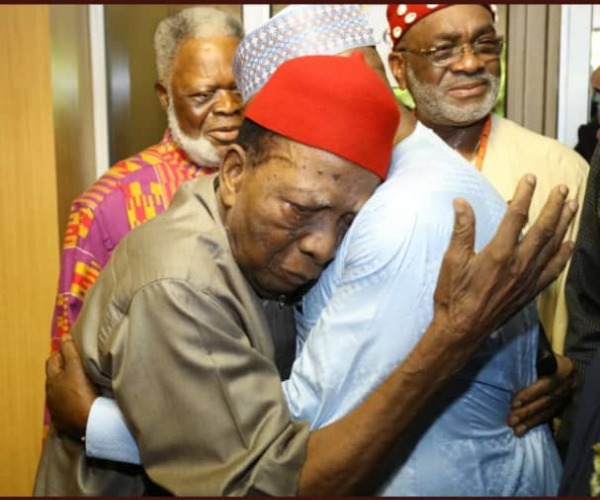 Second Republic lawmaker and the Abia State Chairman of the All Progressives Congress Elders Council, Chief Godfrey Onyemaobi, has expressed doubt over the ability of the presidential candidate of the Peoples Democratic Party, PDP, Atiku Abubakar, to restructure Nigeria if elected.

He criticized the Igbo Leaders of Thoughts led by Professor Ben Nwabueze, over the purported endorsement of the former Nigeria former Vice President, for the 2019 presidential election in the country.

Atiku received the endorsement in Enugu during a gathering of Igbo leaders last Wednesday.

Onyemaobi, in a chat on Monday night, claimed that the Igbo leaders that attended the Enugu meeting, were arch supporters of the opposition PDP, and lacked powers to speak for Ndigbo.

The elder statesman said, “Nigeria is a free country, and any person is free to express his or her opinions pertaining to events in the country. Those Igbo leaders who assemblage in Enugu were only discussing and expressing their own opinions.

“They are not talking for the Igbo nation. As you know, all politics is local. So, I don’t see how their opinions will influence events in all over Igbo land.

“Furthermore, those are arch supporters of PDP. So, they should be talking to raise the morale of their members. Atiku promised his going to restructure Nigeria. But, he has not told us how, the shape and the form the restructuring will be.

“If you remember last week, when the President went to France, and when he was commenting on restructuring, he said nobody or person has really defined what restructuring meant.

“I’m sorry; our dear brother from Anambra State, Governor Willie Obiano, said restructuring means, giving Igbo nation additional states. That is his opinion. That is how he understands restructuring.

He added that, “Atiku has to tell us in what nature is he going to restructure the country. He hasn’t got the powers on his own to decree events regarding restructuring to come into being like the military did.

“Are you sure he (Atiku) will get the required supports from the national Assembly? So, if those Igbo leaders bought Atiku’s game plan, I will call it, buying a pig in pork. So, like I said, they are entitled to their opinions.”