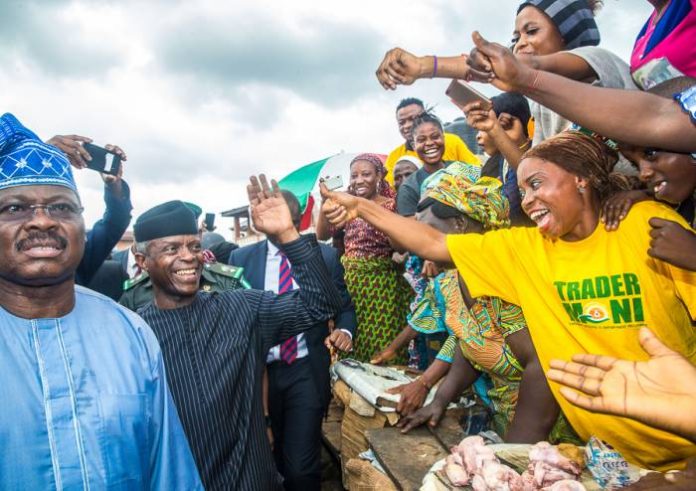 Osinbajo disclosed this while speaking with newsmen during a visit to Bodija and Oje markets in Ibadan on Thursday to monitor the Trader Moni initiative.

The News Agency of Nigeria (NAN) reports that the initiative is a Federal Government intervention programme for petty traders under the Government Enterprise and Empowerment Programme(GEEP).

“As part of efforts to institutionalise the social investment scheme process, this administration will soon establish the People Money Bank and along the line Entrepreneurship Bank,” he said.

The vice president said the initiative was part of the APC agenda, adding that the People Money Bank would be devoted to giving credit to ordinary people.

Osinbajo said the Federal Government was committed to empowering traders toward improving the prospects of Small and Medium Scale Enterprises (SMEs).

He said that no fewer than one million traders had already benefitted from the ‘Trader Moni.’

“The first phase of the Trader Moni was targeted at two million petty traders across the country but over a million have today benefitted from the scheme.

“We have observed that nobody wants to give these traders credit because lenders believe they won’t pay back.

“The market traders represented the most significant percentage of those who engage in commercial activities.

“Both the Trader Moni and Market Moni scheme seeks to address that large population or persons involved in commercial activities who usually don’t have access to credit,” he said.

Some of the traders, who spoke to NAN at the markets, lauded the initiative of the Federal Government.

Mr Saliu Delesolu, the Babaloja of Oje market, lauded the Federal Government for initiating the programme, saying it would enhance petty trading.

“This is the first time a government in this country will be extending credit facility to petty traders. We appreciate this and thank President Muhammadu Buhari for this.

“We assure our members that the money would go round. Not everybody could benefit from it at once but we have been assured that the programme will be institutionalised,” he said.

Mrs Olajumoke Ajao, a petty trader, also corroborated Delesolu’s claim, saying the government must be commended for the gesture.