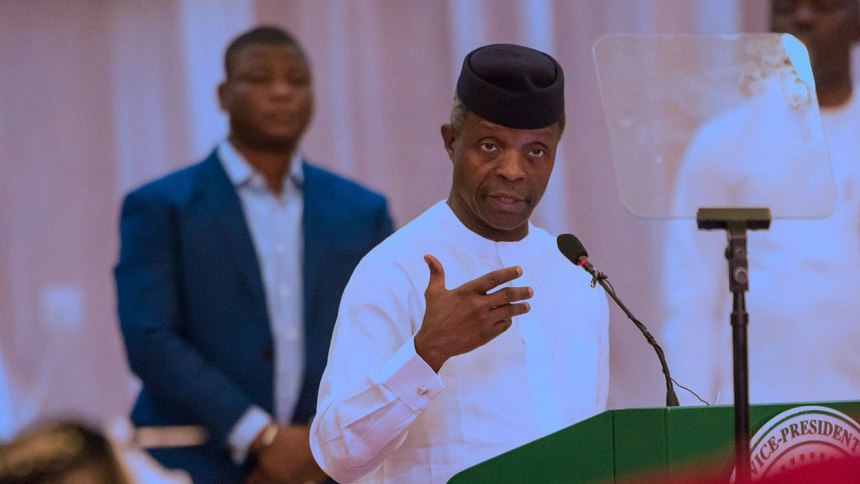 Vice President, Prof. Yemi Osinbajo, has restated that he is an advocate of fiscal federalism, stronger state governments and state police.

Osinbajo made this submission while delivering the 40th Anniversary Lecture of the Association of Friends on Monday in Lagos.

The theme of the lecture is “Restructuring and the Nigerian Federation.”

He reiterated his stance that good governance was what Nigeria needed rather than geographical restructuring.

“I have been an advocate, both in court and outside, of fiscal federalism and stronger state governments.

“ I have argued in favour of state police, for the simple reason that policing is a local function.

“You simply cannot effectively police Nigeria from Abuja; only recently, I made a point that stronger, more autonomous states would effectively eradicate poverty.

“ So, I do not believe that geographical restructuring is an answer to Nigeria’s socio-economic circumstances.

“That would only result in greater administrative costs; but there can be no doubt that we need deeper fiscal federalism and good governance.”

He argued that state governments had enormous constitutional powers which they should harness to better their fortunes.

The vice president said that the Supreme Court held that states had a constitutional right to create local governments, pursuant to Section 8 of the Constitution.

He said that the creation remained incomplete until the National Assembly, by resolution, amended the existing list of local governments to capture the newly created councils.

Osinbajo said further that the apex court ruled also that with respect to federal land, the state had exclusive authority to grant authority to for building or developmental control permits.

He said further that the Supreme Court ruled in favour of Lagos State Government as it struck down many provisions of the law that sought to give the Federal Government control over local government funding.

He said that the Lagos State Government took the challenge which resulted in the state earning more Internally Generated Revenue (IGR) than 30 Nigerian states put together.

Osinbajo said it was wrong to mix up all the issues of good governance and diversification of the economy with the argument on corruption.

“ It involves social justice, investing in the poor, jobs for young people, which explains our School Feeding Programme, providing a meal per day to over nine million pupils in 25 states today.

“Our N-Power is now employing 500, 000 graduates; our TraderMoni that will be giving microcredit to two million petty traders; our Conditional Cash Transfers giving monthly grants to over 400,000 of the poorest in Nigeria.

“The plan is to cover over a million households.”

He said that in arguing for good governance, Nigeria’s greatest problem was grand corruption.

The vice president described corruption as the unbelievable looting of the treasury by simply making huge cash withdrawals in local and foreign currencies–a travesty which President Muhammadu Buhari stopped.

According to him, the restructuring Nigeria needs is the restructuring of governance in such manner as to eliminate corruption and create an enabling environment for growth and investments in infrastructure, education, nutrition and better sanitation.

Earlier in his address, Alhaji Oluropo Owolabi, said that the topic of the lecture could not have come at a better time.

He said that in recent times, restructuring had dominated the nation’s political discourse; hence the choice of the vice president, a professor of law for the lecture.

Owolabi said that the association was borne out of a vision of some young men, eight of them who decided in 1978 to concretise their fledging relationship and dominance of social space into a sustainable institution.