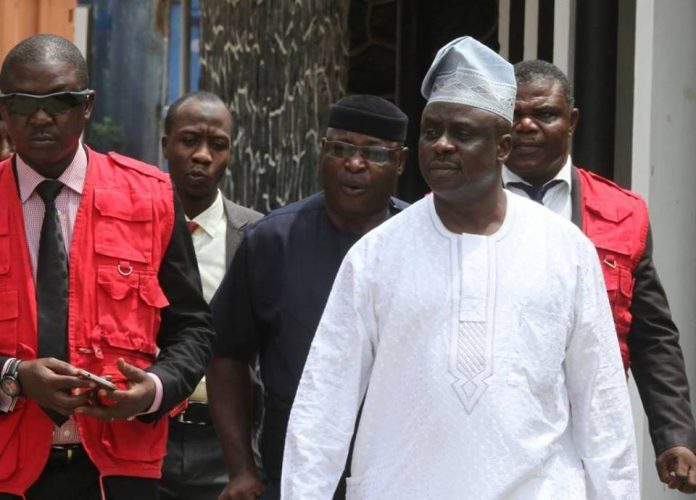 The Economic and Financial Crimes Commission, EFCC, on Tuesday, re-arraigned a former Chief of Air Staff, Air Marshall Adesina Amosu (retd.) and two others before Justice C. J. Aneke of the Federal High Court sitting in Ikoyi, Lagos on an amended 13-count charge bordering on money laundering to the tune of N21bn.

Amosu is facing trial alongside Air Vice Marshal Jacob Bola Adigun, a former Chief of Accounts and Budgeting, and Air Commodore Gbadebo Owodunni, a former Director of Finance and Budgeting , for alleged conspiracy and conversion of the funds belonging to the Nigerian Air Force, NAF, to their personal use.

However, Justice Aneke, earlier in his ruling at today’s sitting, dismissed an application by the defendants seeking to dismiss and acquit the fourth to 11th defendants on the grounds that their names were not included in the amended charge.

The Judge also ordered the defendants to take their pleas.

Based on the ruling of the Court, the prosecution counsel, Nnemeka Omewa, told the court that the EFCC had a 13- count amended charge, dated October 15, 2018 and prayed the court for the charge to be read to the defendants.

One of the counts reads: “That you, Air Marshal Adesola Amosun Nunayon (RTD) Air Vice Marshal Jacob Bola Adigun and Air Commodore Gbadebo Owodunni Olugbenga, on or about the 5th day of March, 2014 in Lagos, within the jurisdiction of this Honorable court conspired amongst yourselves to convert the total sum of N21,467,634,707.43(Twenty One Billion, Four Hundred and sixty seven Million, Six Hundred and Thirty Four Thousand, seven Hundred and Seven Naira, forty three Kobo), property of the Nigerian Air Force which you sum you reasonably ought to have known forms part of proceeds of your unlawful activities to wit: criminal breach of trust,and hereby Committed an offence contrary to section 18(a) of the Money Laundering ( prohibition) Act, 2011( as amended) and punishable under section 15(3) of the same Act.”

The defendants pleaded not guilty to the charge preferred against them.

In view of their pleas, the prosecution counsel pleaded with the court to allow him to present his first witness.

However, in his response, the defence counsel, Rotimi Oguneso, prayed the court to allow his clients to continue to enjoy the existing bail conditions granted them and to adjourn the matter to Wednesday, November 14, 2018 for continuation of trial.

Justice Aneke, after listening to both counsels, granted the defendants bail on the ealier conditions granted them and adjourned the matter to November 14, 2018 for continuation of trial.