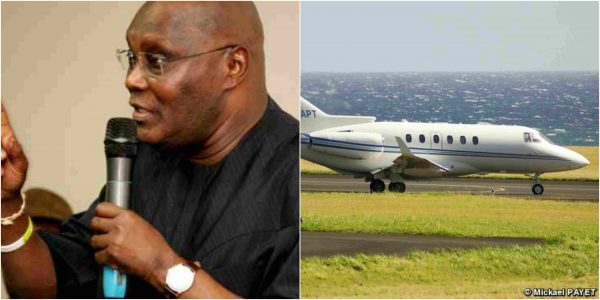 There was a howl of indignant protests in the opposition camp yesterday following the search of the airplane of the presidential candidate of the Peoples Democratic Party (PDP), Atiku Abubakar, by security operatives.

Shortly after emerging the presidential candidate of the PDP, Atiku had travelled to Dubai where he was said to have held series of strategic meetings with PDP leaders.

Confirming the search on his airplane, the former vice president said the incident was a plan to intimidate him.

“I arrived in Abuja this morning to a search by agents of the state, aimed at intimidating me and my staff. I am committed to building a Nigeria where no citizen is intimidated by agents of state who are paid to protect them”, he noted in a tweet on his verified twitter handle, @atiku.

Earlier, the head of Atiku’s media team, Paul Ibe, had raised the alarm that operatives of the DSS raided the jet that brought Atiku back to Nigeria.

It was reported that the private jet conveying Atiku from Dubai landed at the Nnamdi Azikiwe International Airport, Abuja, at about 1:30am into the waiting arms of the security operatives.

The DSS operatives allegedly searched Atiku and the jet, alongside officers of the Nigerian Immigration Service (NIS) and the Nigeria Customs Service.

The combined security team was said to have informed Atiku that they had an arrest warrant to search him.

They reportedly stripped everything, including the luggage, and also searched the pilot and co-pilot.

It was gathered the operatives found nothing incriminating on Atiku during the operation.

Reacting to the development, former deputy national publicity secretary of the All Progressives Congress (APC), Comrade Timi Frank, said the plot, which was meant to embarrass Atiku, turned out to be a failure.

Frank alleged that Atiku, who had returned to Nigeria at 1am yesterday from his vacation in Dubai, was thoroughly searched for some hours by a special squad of security men deployed by the presidency with recording gadgets on them around his aircraft.

“Nothing was however found on him or in his aircraft”, he added.

Frank further alleged that the plan, which included dropping bags of foreign currencies and other implicating materials in Atiku’s aircraft on his arrival, was also unsuccessful.

In a statement he issued yesterday afternoon, Frank alleged that the special squad of security men who carried out the search confessed that they were directed by the presidency to embarrass the former vice president.

The squad, he claimed, was armed with recording gadgets in and out of Atiku’s aircraft “to see if he returned to the country with foreign currencies or any other implicating materials”.

The former APC deputy spokesman said the security men and the presidency were disappointed when nothing implicating was found on either Atiku or his aircraft.

While condemning what he tagged President Muhammadu Buhari’s desperate move to nail the PDP presidential candidate, Frank said if former President Goodluck Jonathan was this harsh to Buhari in 2015, he would not be occupying the office of president today.

Frank said since Atiku Abubakar left office as vice president eight years ago, “this is the first time out of desperation to nail him that he has been searched embarrassingly.”

He warned President Buhari to desist from his act of desperation against the PDP presidential candidate.

“Due to information at our disposal, I have been saying it, that the PDP presidential candidate is not safe under this administration because the Buhari administration is deploying all manner of devilish strategies to nail all the opposition leaders, especially Alhaji Atiku Abubakar.

“We are using this medium to inform the international community to also take note of how the Buhari administration is intimidating the opposition presidential candidate, Atiku Abubakar, who has served Nigeria as vice president for eight years,” Frank stated.

But the Department of State Security Service (DSS) said yesterday that it had no knowledge of the raid on the aircraft that brought Atiku to Nigeria.

DSS spokesperson, Peter Afunanya, in a telephone chat that the DSS was not aware of any such raid by its operatives to harass or intimidate Atiku.

They Tampered With Our Campaign Documents, PDP Alleges

In its reaction, the PDP yesterday alleged that the security operatives who searched the airplane of its presidential candidate violently tampered with Atiku’s campaign documents.

According to the main opposition party, the deployment of special security squad that searched Atiku’s aircraft on arrival from Dubai was a resort to state-backed violence against their presidential candidate.

While noting that the APC and the presidency must be held responsible should any harm befall Atiku or any member of his campaign team, the PDP alleged that the special security squad unleashed on Atiku was made up of the Army, Police and paramilitary.

A statement by the national publicity secretary of the party, Kola Ologbondiyan, noted that it was shocking when the “deadly squad, in a Gestapo style attack, and acting on ‘orders from above’ rushed our candidate immediately he landed and attempted to physically manhandle him before invading his aircraft with dangerous weapons to conduct a violent search.

“While they did not find anything incriminating on our presidential candidate, this deadly squad violently tampered with certain personal documents and gadgets belonging to him, including some of his campaign documents”, he added.

The PDP claimed that the APC-led government had been jittery over Atiku’s soaring popularity since his emergence as the party’s candidate.

Ologbondiyan stated: “We invite the world to note that, having failed to drag down our Presidential candidate with spurious allegations and smear campaign, the APC has now resorted to state-backed violence against him and must be held responsible should any harm befall him or any member of his campaign team.

“We will not accept this recourse to violence, which we believe is orchestrated to directly harm our Presidential candidate, foist a siege mentality on the system and set the stage for series of coordinated violence, ostensibly to truncate a peaceful conduct of the 2019 general election.

“The Buhari Presidency and the APC should bear in mind that this is an attack on our democracy and the collective sensibility of the overwhelming majority of Nigerians, across board, who have accepted the choice of Atiku Abubakar as Nigeria’s next President and they will vigorously deploy every means available in a democracy to defend him and our democratic process.

“Today, Atiku Abubakar, as a Presidential candidate, has the highest demography of supporters and volunteers across our nation and we will not hesitate to call them out in defence of democracy if another such attempt is made against our candidate”.

Spokesman of the campaign team, Segun Sowunmi, who gave an account of what transpired, said there was the need for extreme citizen vigilance ahead of the 2019 general election.

Confirming the incident , he said, “It is just indicative that they (APC and presidency) are scared of our candidate and are concerned about his profile because he is the main challenger to them in the election.

“And you know when you have frittered all the goodwill and dashed all the hope the people have in you, you begin to think of other things that are disingenuous to try and solve your own self-inflicted problems.”

On what transpired, he said, “We observed that a larger than normal retinue of security operatives were there, all of them looking and acting Gestapo, coming around with cameras and generally trying to harass the people there.

“This practice is very consistent with what you find when a government has lost all credibility and goodwill it has enjoyed and is now extremely scared of the election with its main opponents.

“This is the kind of nonsense we observe in other smaller countries that are in a dictatorship. We thought that Nigeria could never be caught in this kind of web. What we are suspecting and what we are seeing now is that, perhaps, if we all are not careful as citizens of the country and we don’t increase our vigilance level, we may find ourselves in a situation which is exceedingly ugly as we proceed to the elections.”

Sowunmi added that Atiku was well and ready to embark on a robust campaign.

“He (Atiku) has returned to the country and he is ready for a very robust campaign that is about to commence any time from now. They have a right to search. It is their duty but we just want them to also be reasonable and courteous in the discharge of their responsibility.”

When asked if they would make a formal petition to higher authorities, he said, “The thing is that we are going to let this fly. There is nothing to report but his Excellency may take a decision otherwise”.

Nobody Is Exempted From Checks At Our Airports – FG

Reacting to the development, the federal government declared yesterday that that all passengers coming into the country are mandated to submit themselves to checks at the airport.

In a statement he issued last night, the Minister of State for Aviation, Senator Hadi Sirika, urged Nigerians to ignore Atiku’s outburst, saying one of the resolutions of the Atiku team was scaremongering.

The minister said, “This is a mischievous attempt to grab the headlines. Nigerians need to know that one of the resolutions of the Atiku team at their recently-concluded, opulently-held Dubai retreat was to embark on scaremongering. This is one of such.

“For the records, all incoming passengers on international flights go through customs, Immigration, health and security screening. Where the aircraft is using the private, charter wing, as the PDP Candidate did, such arrivals are met by a team of the Immìgration, customs and other security agencies.

“They go to the arriving aircraft as a team. The airport authorities confirm that this is a routine process, applying to all international arrivals, including the minister unless the passenger is the President of Nigeria. The President, the Vice President and passengers aboard planes on the Presidential air fleet use the Presidential wing of the airport”.

Sirika further explained even in the presidential wing of the airport which the president of Nigeria uses, there is the presence of Immigration and other security officials who must stamp his or her passport on arrival.

Sirika pointed out that by standard procedure, all aircraft on international arrivals must first of all park at the international wing of the aircraft before moving to the domestic terminal upon the completion of the arrival processes.

He added that while it is true that the Task Force on Currency at the airport did the routine action of checking the former vice president’s travelling bags, he was accorded full respects as a senior citizen.

“Law-abiding citizens are encouraged to respect the laws of the country and our VIPs should not seek to be treated over and above the citizens they wish to serve,” he said.