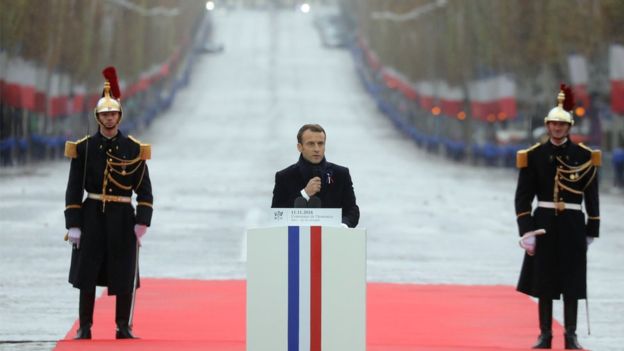 French President Emmanuel Macron has urged world leaders marking the centenary of the World War One Armistice to reject nationalism.

Addressing about 70 leaders in Paris including US President Donald Trump and Russian President Vladimir Putin called on them to “fight for peace”.

“Let us build our hopes rather than playing our fears against each other,” he said.

Many other events have been taking place around the world.

Mr Macron and dignitaries marched to the Tomb of the Unknown Soldier, a memorial to France’s fallen under the Arc de Triomphe, in the rain under black umbrellas as church bells tolled through the city.

In a speech lasting nearly 20 minutes, the French leader described nationalism as a “betrayal of patriotism”.

Mr Macron urged leaders to “fight for peace” “By saying ‘our interests first and the others don’t matter’ we erase the most precious thing a nation has, which gives it life – its moral values,” he said.

Meanwhile, just before the leaders assembled, a topless female protester with the words “fake peacemaker” written on her chest came within a few metres of Mr Trump’s motorcade before being apprehended.

President Trump, however, caused controversy by cancelling a trip to a cemetery for the war dead because of bad weather.

A group of around 50 activist organisations plan to hold a demonstration in Paris later on Sunday in protest against the US leader’s visit.

In Australia, a ceremony was held at the National War Memorial in Canberra, while in Adelaide an aircraft dropped thousands of red paper poppies.

During his speech in Canberra, Australian Prime Minister Scott Morrison spoke of the importance of remembrance, saying people need “to learn from the past so that we can better navigate the changing currents of our own times, for our own children, and for the next generations”.