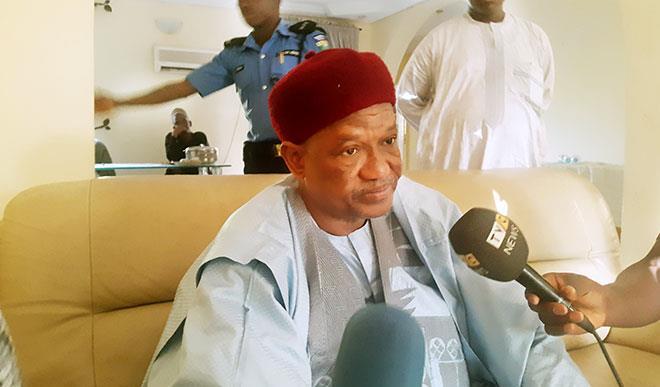 Sen. Bukar Abba Ibrahim has denied reports that he is supporting Atiku Abubakar although the former vice president is from the same North east as he is. Speaking to RUTH CHOJI, he also clarifies recent comments he made about the president. Excerpts.

There were reports that you said the APC will lose the presidency because they have failed Nigerians. How true are these reports?

What I said was that, we have two strong candidates, Muhammadu Buhari and Atiku Abubakar. I said those of us in the North east should wake up and tighten our belts, else we cannot deliver the North east to the current president. I am an APC member and I will forever remain one. I supported Buhari and will continue to support him but my concern is that, we need to work very hard to ensure that we defeat Atiku because he is from the North east.

That was what I tried to say, but it was misinterpreted to mean something else, which I said, we will lose the North east. No, we are going to win the elections but I want us to win overwhelmingly so that there will be no doubt about the position of our beloved president. I have supported Buhari all along and will continue to support him. As an elder statesman, I just felt I should give my word of advice so that we are not taken unawares and then Atiku surprises us. I think that is a legitimate concern of an elder statesman.

I am not supporting Atiku and I am not in any way supporting PDP. I have never been PDP and I will never be PDP. I am just making a call that nobody surprises us. Buhari will win but I want him to win overwhelmingly.

You once appealed to your senatorial zone to allow you return to the senate in 2019 for the last time, yet you recently dropped your ambition for your state governor. What made you change your mind?

I have been called the father of Yobe politics for years and I didn’t earn that for nothing. I am a serving senator and my governor who is leaving has shown interest in the seat. We are from the same senatorial district and all of them are my political subjects. I cannot drag any position with anybody over any position. That was my decision and that is why I left it for my governor.

So you were not forced or threatened in any way to forfeit the senate to the governor?

Nobody forced me. I just don’t want to sluck it out with my political children. Having been a governor for 10 years and a senator for 12 years, what more am I looking for? I cannot go and stand in the rostrum and start asking people to vote for me against any of my children.

Coming back to the just concluded APC primaries, it left lots of anger and division in some states. Some believe it could cause the party the general elections. Do you also think so?

Are you saying that the indirect primaries does not foster internal democracy in the party?

Yes, it brings in lots of corruption because people use their money and power to coax the process in their favour against the interest of the others. If we can have consensus primaries, fine, if it is direct primaries, then it is even better.

But there have been reports in some quarters that some of the people who joined the queue in the direct primaries are not card carrying members of the APC. If this is true, don’t you think it is an abuse of the process?

That Is left for INEC to verify. They should know who are members of APC and those that are not. Members have their cards and if people join the queue without their membership cards, they should be fished out and sent out.

There have been reports that APC governors have passed a vote of no confidence on the APC chairman, Adams Oshiomole, what is your take on this?

I don’t think there is a need for that kind of thing. Adams has tried his best and John Oyegun also did his best, which is why the APC won the 2015 elections. There are few problems here and there, but we still have enough time to resolve them. Adams is trying his best and I believe he is a true progressive. With Adams as chairman, I believe we will win the elections.

The last democratic elected leader from the North east was Tafawa Balewa and Now Atiku has emerged from that zone. Don’t you think the people will want to vote their own?

Of course that should be expected because Atiku is a formidable candidate, which is why I said we need to work hard to defeat him in that zone. I don’t think Buhari has any problem anywhere else for now except that zone because Atiku has emerged from there.

We need to work extra hard to win their votes. I believe president Buhari will win and defeat Atiku. I was only trying to make people realise that Atiku is not a push over. He was vice president of Nigeria, everybody knows he has resources even more than our president. So most of us must come together and defeat him in the North east.

But can you say that the APC has done well in the key areas they used to campaign with, like security and corruption?

Yes we have done very well particularly in security. What he has done in terms of security has not been done by anybody before. We are now secured. There is security in the North east. Mr. President has continued to create more and more jobs and he will continue to do that into his second term. I believe by the time he finishes his first term, he will do better in his second term.

But the issue of herdsmen, bandits in Zamfara and Shiites killings is threatening the peace and unity of the country. If the president has done well in security, why do we still hear of these killings?

There was a time I could not go to my village for over a year, but now I can go there any day and time. These killings are different from the North east problem. The North east killings was done by Boko Haram but these other ones are either tribal, political, communal or have religious undertones. There is no way a complex country like Nigeria will not have such issues, it will be difficult to have a perfect system.

How do we end these killings?

These things will stop gradually. We will sort them out step by step as the problem crops up. Nigeria is a very strong and united country. All these crises and killings cannot break this country. The earlier people understand that the better for all of us.

Are you not worried that the country is now more divided than it used to be under this administration?

It is not true. We have always had divergents as a nation. This is the first time during Buhari’s period that parties were merged and it took over power from the PDP. There has never been any time in the history of this country when the North and South west came together to vote the same person.

Going back to Yobe, the primaries that produced the APC candidate of the state was received with mix reactions. Would you say that it was free and fair?

Of course it was free and fair. The stakeholders meet, including those in government and outside government, meet and agreed on a candidate. I wasn’t there but I was reliably informed. They are now campaigning without any division and we will deliver Yobe to APC.

Coming back to you, what will you be doing now that you are not returning to the senate?

There are a thousand and one things to do. I have a huge farm, five kilometres by three kilometres, which is about 15 kilometres, fully fenced. I have over five hundred cattle on the farm. I have eight blocks of poultry and other things on the farm. This is enough to keep me busy. From time to time, I will be coming to Abuja and other places. Once a politician, always a politician. I will be an adviser, a guide and elder statesman. So there are a lot of things I can do. I have young children, three are still in primary school, and I have twenty children with some married and others still in school. So I have enough things that will keep me busy.