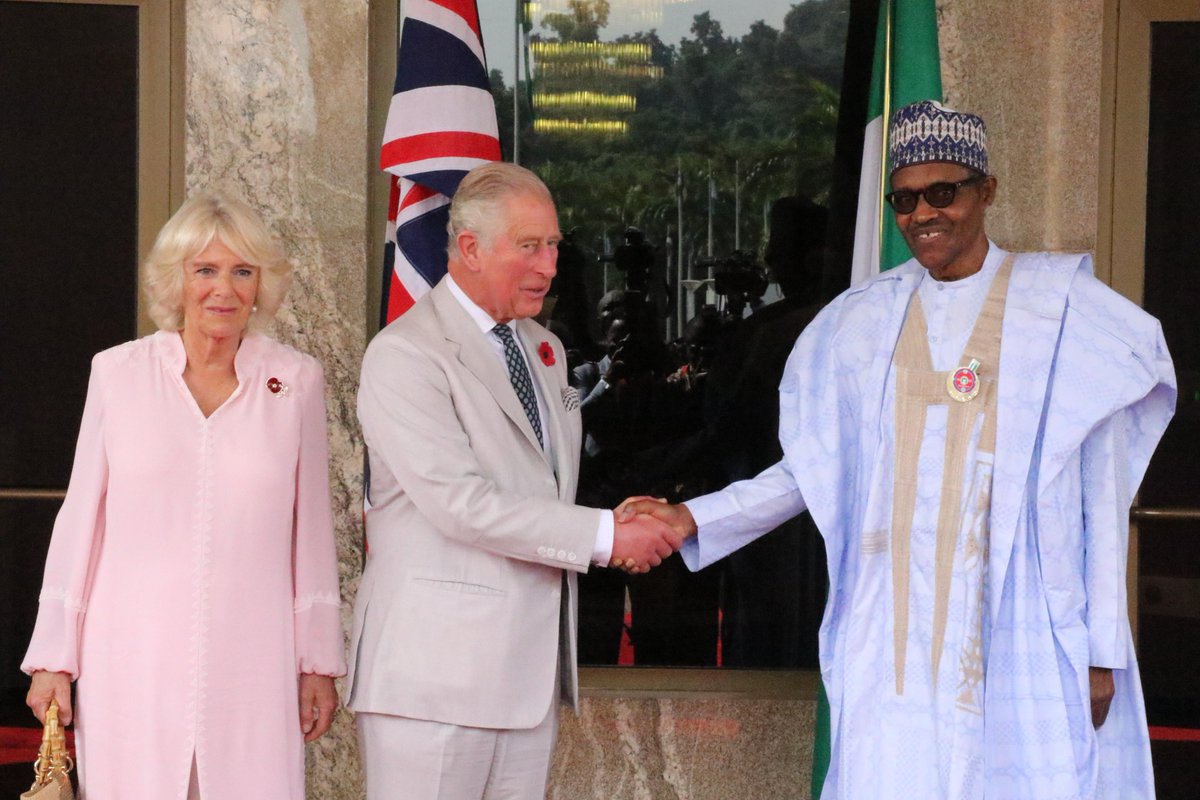 Nigeria’s contact with the Great Britain dates back to colonial era, however, with independence in 1960, the relationship was replaced with mutual diplomatic ties. BLESSING BATURE writes that the visit of the heir apparent to the British throne , Prince Charles will no doubt resonate Nigeria-Bristish Ties

The Prince of Wales and heir to the British throne, Prince Charles and his wife, the Duchess of Cornwall, Camilla, were received in Abuja, the nation’s capital on Tuesday November 6 , as part of a 9-day tour to Africa.

The Royal Highnesses came into Nigeria aboard a Boeing 737, Royal Aircraft emblazoned in the Union Jack, (the British flag).The touched down at the Presidential Wing of the Dr. Nnamdi Azikiwe International Airport, Abuja at exactly 13.25 hours Nigerian Local time.

History has it that after the Union Jack was lowered and Nigeria’s Green/ White /Green flag hosted on October 1, 1960, signaling the end of colonial relationship between Nigeria and the United Kingdom, there has never been an elaborate state visit by officials of the British government or the Royal family, akin to the just concluded state visit by the heir to the British throne, Prince Charles and his wife, Camilla.

This is the third time the Prince of Wales will be visiting the country, his previous visits were in 1990, 1999 and 2006, while it will be the Duchess of Cornwall’s first visit to Nigeria.

Given the proximity between the visit of the Prime Minister, Theresa May in August and now that of Prince Charles, pundits are of the opinion that these visits are frantic moves by the British to rekindle it’s relationship with old allies.

The Royal Highnesses met with some of Nigeria’s dynamic youth as well as traditional leaders, the business community, the armed forces, and people from the arts, fashion and charitable sector.

The visit highlighted key themes in both nations’ relationship, including the importance of Commonwealth ties, youth opportunity, business and entrepreneurship, educating of women and girls, and defence co-operation, among other issues.

Judging from his parley with Traditional Rulers, bookmakers have predicted that respite may have come the way of Benin Kingdom, as its artifact said to have been ‘forcefully’ taken away in 1897, by the British forces may be returned.

Determined to flout a Benin historical museum, the current Oba of Benin has never hidden his desire for a return of the stolen artifacts to facilitate his museum project. to make this dream a reality, Oba Ewuari II utilised the golden opportunity of meeting with Prince Charles appealing passionately to him to facilitate the return of their inheritance .

According to him, “One of the things that is particularly clear is one of the discussion with the traditional rulers, where the children who will be healthier.

On farmers/herders clashes the Prince of Wales said all of these are entitled to the complexity of some of the issues surrounding the farmers/herder clashes and there is need to know what the impressions are and how to resolve them”.

On how to empower the youths, he said, “The vision of youth on how to build skills, job opportunity and growth and talking to individuals and entrepreneurs who might be interested in engaging with the Princes’ trust, which will open up opportunities for the people here in Nigeria.

On the outcome of the business meeting, the Prince had with the business community in Lagos, the deliverable and the timeline for achieving some of the goals set. he said discussions are going on about contracts.

The Prince of Wales was also in Lagos. where he visited the Nigerian Navy N.N.S. Ekulu berthed at the Lagos Naval Dockyard. Onboard, he was shown the close cooperation between the UK and Nigerian naval forces as he watched a maritime security exercise.

The British military are currently providing maritime security training for the Nigerian Navy and their Special Boat Service to help them counter the insurgency in North east Nigeria and improve security in the Gulf of Guinea.

The Prince also attended a British Council festival organised to showcase entrepreneurial individuals, including many women, who are innovating modern arts and culture in Nigeria. Work such as fashion, jewelries, and interior designs, music, film and dance performances were showcased . The festival demonstrated the breadth and vibrancy of the creative arts scene.

He admired a sculpture of his mother, Queen Elizabeth II, created by Ben Enwonwu. He also met some of the city’s leading fashion designers. Former Super Eagles captain and British Premier League footballer Joseph Yobo, who presented a Nigeria World Cup 2018 football shirt to the Prince of Wales. Other prominent guests from the arts included actresses Genevieve Nnaji and Rita Dominic and musician Yemi Alade.

Back in Abuja Prince Charles visited the National Military Cemetery where he laid a wreath, on behalf of the British people, in tribute in honor of late Heroes who fought and made sacrifices in the two World Wars.

Minister of Defence Muhammad Mansur Dan-Ali also laid a wreath. Almost one thousand Nigerians lost their lives between 1914 and 1918, and more than 1,100 died from 1939 to 1945. The Prince also paid respect to those who have lost their lives in service more recently, including in the Boko Haram conflict.

Prince Charles also spoke to researchers from the National Veterinary Research Institute who are developing vaccinations to combat animal diseases.

The Prince met with women supported by PropCom Mai-karfi to increase their income through poultry and Pye Ryat, who are using modern technology to produce a local food called ‘Acha.’

He then met WaterAid staff, who explained how their work helps deliver safe, clean water to rural villages, local communities and cities across the country. Although more people have access to clean water than ever before, more than 60,000 children under five still die each year from poor water and sanitation.

The Prince of Wales was also delighted to meet with a small group of youth ambassadors who are working together to promote peace and reconciliation in their home regions.