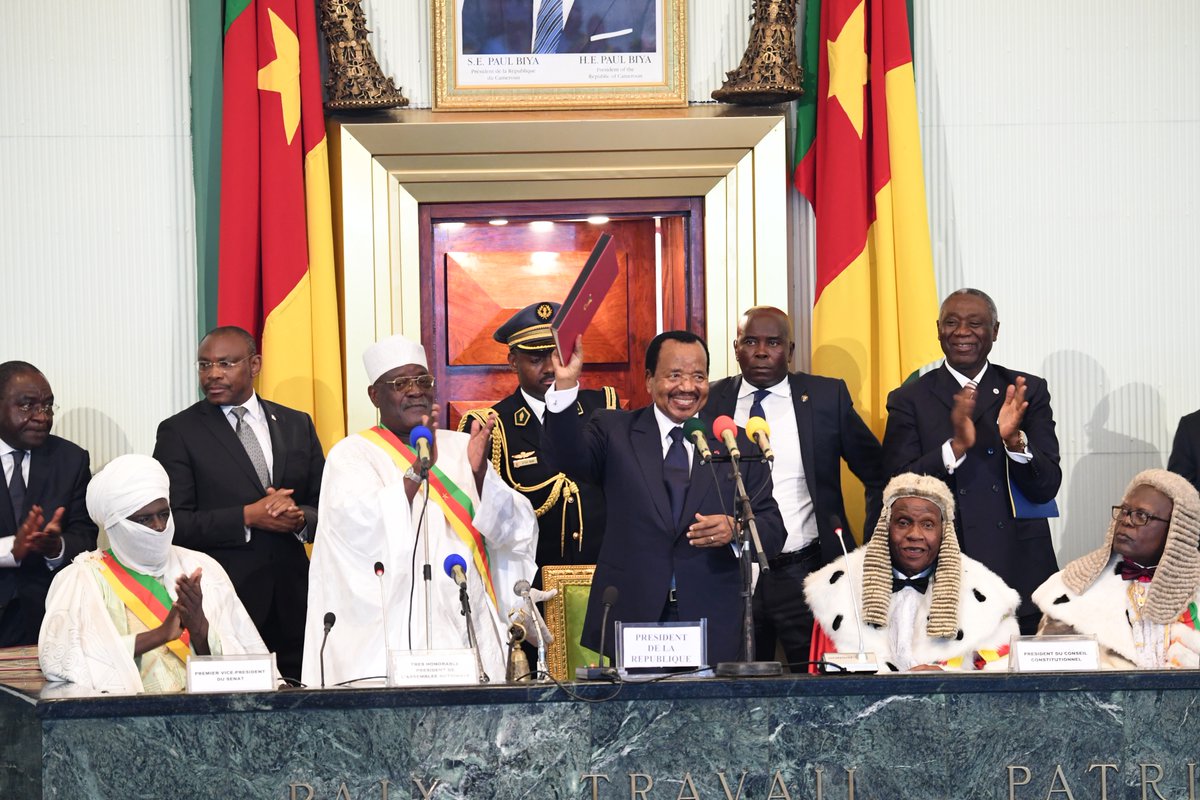 Cameroon’s 85-year-old President Paul Biya vowed Tuesday to pursue policies of decentralisation to address “frustrations and aspirations” in English-speaking regions hit by separatist unrest as he was sworn in for a seventh term in office.
But he firmly ruled out secession for the troubled regions and accused armed radicals of instigating “terror and desolation.”

On the eve of his inauguration, 79 school students were abducted in Bamenda, capital of the Northwest Region, in the worst incident so far in 13 months of pro-independence violence.

“I have carefully examined the frustrations and aspirations of the great majority of our fellow citizens” in the Northwest and South-west Regions, Biya said in his inauguration speech.

And he pledged a “good number of responses” which would be channelled through “accelerating the decentralisation process which is under way.”

But he dismissed any prospect of secession, declaring “the future of our compatriots in the Northwest and Southwest lies in the framework of our Republic.”

Denouncing “the yoke of extremism which imposes terror and desolation”, he called on armed separatists to “lay down their arms and return to the right path.”

“The vast majority of (Cameroonians in anglophone regions) want the swift restoration of peace, within the national community,” Biya said, urging them not to “lose hope”.

Biya, who has ruled the country for 35 years, was declared victor in the October 7 vote with 71 percent of the ballot.

But the elections were marked by low turnout, violence and allegations of fraud.

Cameroon’s 22 million people are mainly French-speakers, but around a fifth are English-speaking.

In 2016, resentment at perceived discrimination in education, the judiciary and the economy fanned demands for autonomy in the Northwest and neighbouring Southwest Region.

In 2017, as Biya refused any concessions, radicals declared an independent state — the “Republic of Ambazonia” — and took up arms.

Separatists have gunned down troops and police, boycotted and torched schools and attacked other symbols of the Cameroonian state, while the authorities have responded with a brutal crackdown.

At least 400 civilians have died this year as well as more than 175 members of the security forces, according to an NGO toll.

More than 300,000 people have fled the violence, many living hand-to-mouth in the forests, and some across the border into Nigeria.

In the October election, turnout was a mere five percent in the Northwest and 15 percent in the Southwest, although Biya won more than two-thirds of the votes cast in both regions.

Biya made no reference in his speech to Monday’s abduction, in which armed men seized the school principal, a teacher and a driver in addition to 79 students.

In a six-minute video, 11 boys who said they were from the Presbyterian Secondary School of Nkwen, identified themselves and said they had been taken by the “Amba Boys” — the term for anglophone separatists.

A source close to the school confirmed the boys were enrolled there.

“I personally recognised some of them. For the time being, we’ve haven’t been able to find out whether the 11 are with the others,” the source said.

READ  2019 presidency: Buhari reveals where his votes will come from

Although mass kidnappings have taken place in neighbouring Nigeria, this is the first such incident in Cameroon.

In April 2014, the Islamist group Boko Haram snatched more than 200 schoolgirls from Chibok, in the northeastern Nigerian state of Borno, stirring a worldwide campaign for their release.

Some 107 girls have since been freed or found, but the Islamist group abducted scores more schoolgirls from neighbouring Yobe state in February this year.

As the security forces stepped up the hunt for the missing boys, the Northwest Region’s governor, Adolphe Lele Lafrique Tchoffo Deben, suspended all inter-departmental road traffic in the area until further notice.