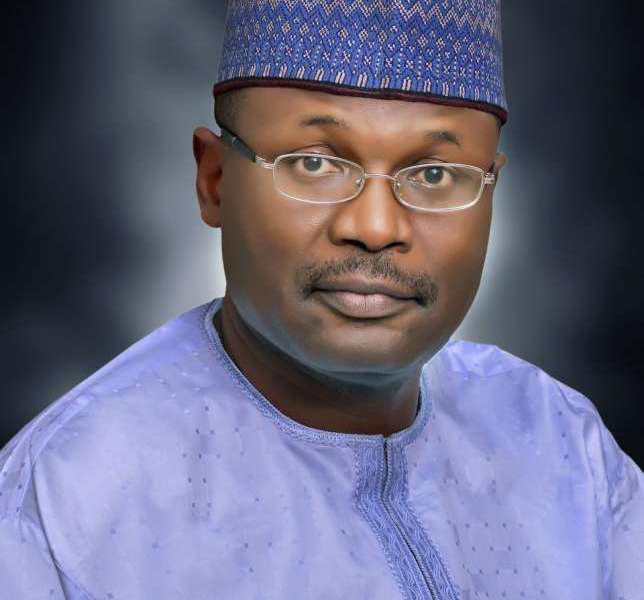 Legal experts in the country have counseled the Independent National Electoral Commission (INEC) against throwing the nation into a constitutional crisis by sticking to the Electoral Act 2010 for the conduct of the 2019 general election instead of using the newly amended Act recently passed by the National Assembly.

Specifically, senior lawyers, including members of the inner bar said INEC chairman, Mahmud Yakubu, must seek legal advice on the matter to avoid crisis in the aftermath of the polls.

They maintained that his position that the new amended Act passed by the National Assembly penultimate week would not be used for the 2019 general election unless it was signed into law at least six months before the next elections could cause avoidable legal mess, which is clearly an invitation to anarchy.

Noting that the INEC boss is not in a position to pick and choose which law to implement, the lawyers pointed out that once a new law is enacted, it repeals the old law on the same subject matter.

According to them, Yakubu is not in a position to sandwich or juxtapose old portions with new ones, just as they insisted that the aspects of a new law cannot be implemented concurrently with portions of the old law or in piecemeal.

The National Assembly is set to finally transmit the Electoral Act (Amendment) Bill passed by the Senate and the House of Representatives for the fourth time to the president this week.

The lawyers who spoke exclusively  in separate interviews averred that once President Muhammadu Buhari appends his assent on the newly passed Electoral Act (Amendment) Bill, the current Electoral Act 2010 is repealed, inoperative and unenforceable in all entirety, just as the new electoral law commands force of law without letting out immediately it is signed.

For instance, the lawyers observed that, while the passed electoral amendment bill dictates that INEC shall use Card Reader to authenticate registered voters before voting as against Voters Registers, the incoming electoral law tells the commission what to do if the machines fail or malfunction.

They said the incoming law is not asking those who card reader fails to confirm their permanent voter’s cards or names to complete incident forms in order to be eligible to vote, adding that the voters register would not be used in any way if the bill becomes a law.

Accordingly, they warned that any attempt to supplement, substitute or replace in part the card reader with voters register already canceled by the amended law anywhere in the country will cause a collateral damage to election petitioners or litigants at the election petitions tribunals.

The lawyers said the way many litigants lost at the Supreme Court for relying on figures of voters authenticated by card readers in 2015 shall be the same case for litigants that plead with figures obtained through the voters registers after the 2019 elections if the bill becomes law.

They pointed out that sections 49 and 52 of the Electoral Act only recognised voters register as a means of authenticating voters then in 2015, but if President Buhari assents to the passed amended bill, card reader shall replace voters register for voters’ accreditation.

Some of the lawyers expressed worry that with the look of things and judging from INEC’s position on the use of card reader in the next general election, most winners and losers will eventually find themselves in the courts and the election petitions tribunals

Former president of the Nigerian Bar Association (NBA), Joseph Daudu (SAN), noted that he does not believe INEC chairman said the new amended bill will not be used in 2019 if signed by the president.

The learned silk said, “Let us wait and see. One needs not to be in a hurry over the INEC boss statement that if the electoral bill becomes law it will not apply in the next elections. I don’t believe he said so.

“On the issue of the card reader, it is a manmade machine that is prone to failure. At all material time, the ultimate reliable means to confirm number of registered voters is the manual voters register’’.

On his part, President Buhari’s former lawyer, Chief Mike Ahamba (SAN), said, “INEC chairman can only implement laws but cannot make any law. The old law and the new law cannot exist at the same time or be applied concurrently. He has to be careful not to invoke anarchy in the town before, during or after the 2019 elections.

“He must seek proper legal advice to determine what to do, except what he is saying is found in the constitution to the extent that any Electoral Act enacted less than six months to the election can’t be applied to conduct the next elections. He has to be guided by what the constitution states precisely’’.

Another member of the inner bar and human rights activist, Chief Femi Falana (SAN), also disagreed with INEC chairman, saying he can’t stand the law on its head.

Falana said, “No, he can’t say so because he is to deal with the law as it is and not as it was. What I understand him saying was that the aspect of the new law relating to party primaries, nomination fees and candidacy can be applied in retrospect or allowed with what the old law says.

“This is because those aspects happened when the new law was not yet in force but other aspects of the electoral conduct can be applied as it is and not as it was. However, since the president has not assented to the bill, we cannot continue to dissipate energy on the matter”.

In his submission, Chief Ozekhome said, “The longest time provided for doing anything in the Electoral Act is 180 days. However, all the processes have already begun, some as far back as four months under the current electoral act.

“What this means is that whatsoever remains to be done in the next four months during which the amendments would operate are to take effect from the day the new electoral act is signed and not to operate retrospectively.

“There is nothing in the new law that is damaging or has taken the wind out of the sail of the electoral act. So, anybody making such statement should be well guided and they should know that what the new electoral act is trying to do is to leave out the problematic areas that aid rigging”.

“If the chairman has concerns, he should approach the National Assembly to review the date of commencement of the law”.

Another constitutional lawyer based in Abuja, Alasa Ismail, stated: “During the 2015 election in Akwa Ibom for instance, while only about 440,000 voters were accredited by card reader, a total number of about 1, 120,000 votes were declared after the election. In other words, 680,000 votes did not pass through the narrow road of accreditation (card reader) which is the gateway to voting.

“When Governor Udom’s opponent insisted that the Akwa Ibom governorship election was invalid because only card readers must be used for the accreditation of all prospective voters, the Supreme Court held otherwise, saying voters register is the lawful means of determining lawful votes.

“In Rivers, the Supreme Court also held that the tribunal and the Court of Appeal were wrong to have nullified the election of Governor Nyesom Wike simply because INEC officials failed to adhere to INEC’s manual, guidelines and directives on the exclusive use of the card reader for accreditation.

“The reverse shall be the case in the courts if President Buhari assents to the just passed electoral amendment bill, which allows card reader to replace voters register by law. My fear is that with the look of things and judging from INEC’s position on the use of card reader in the next election, most winners and losers shall finally emerge in the courts/tribunals’’.

But in his own view, another learned silk, Chief Sowemimo (SAN), called on Nigerians to look beyond the politics of the issue and listen to INEC.

He said, “I think we should look beyond the politics of the situation because if the chairman of the electoral body had said that the logistics of implementing the new law would put them in some difficulties, then he should be listened to.

“This is very important because they are the ones that would implement the law. The law may be there but when you find out that the people that should implement it are handicapped, it means that the law may not be enforceable.

“I believe that even if the issue is taken before the court, the judges would find a way to introduce practicalities into the law”.

The Senate and the House of Representatives had passed the Electoral Act (Amendment) Bill for the fourth time in 2018 on October 23, 2018 and October 24, 2018 respectively, following the adoption of all the 38 clauses recommended for approval by their committees on INEC.

Among the 38 clauses recommended for approval by Senate committee on INEC headed by Senator Suleiman Nazif, which were adopted when Senate passed the bill for the third reading is the use of card reader for the conduct of the 2019 general election.

During the 2015 elections, INEC deployed the card reader for the polls even though there was no such provision in the Electoral Act at the time.

The inclusion of the card reader in the Act was done through an amendment to Section 49 by inserting a new subsection (2) which states: “The Presiding Officer shall use a Smart Card Reader or any other similar technological device that may be prescribed by the Commission, for the purpose of accreditation of voters, to verify, confirm or authenticate the particulars of the voter in the manner prescribed by the Commission.”

A new subsection (4) of the ACT provides that “where a Smart Card Reader deployed for accreditation of voter fails to function in any unit and a fresh card reader is not deployed 3 hours before the close of the election in that unit or units, then the election shall not hold but be rescheduled and conducted within 24 hours thereafter.”

However, a proviso under the same subsection states: “Provided that where the total possible votes from all the affected card readers in the unit or units does not affect the overall result in the constituency or election concerned, the commission shall notwithstanding the fact that a fresh card reader is not deployed as stipulated, announce the final results and declare a winner.”