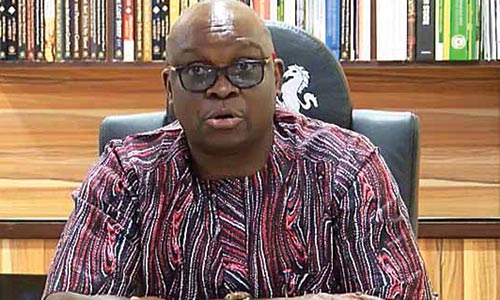 Former Ekiti State Governor, Mr. Ayo Fayose, has told the Chief Judge of Ekiti State, Justice Ayodeji Daramola, to grow up and shed his toga of unbridled hatred for him.

According to a press statement issued on his behalf by his Chief Press Secretary, Mr Idowu Adelusi, the former governor who was reacting to a statement by Daramola bad-mouthing the new state-of-the-art High Court complex constructed by the Fayose administration, said Daramola had only lent credence to the Yoruba adage that the horse of our enemy is never tall enough in our reckoning.

Adelusi said the true test of maturiry and decency is another Yoruba adage which says an elephant is too big an animal that somone out of malice or hatred will compare with a fly.

He continued, “Reproach and bad-belle apart, the high court complex built by Fayose is world class. It is also the first of its kind since the creation of Ekiti state in 1996. “If Daramola cannot commend Fayose, he could as well shut up his mouth and stop behaving like a cry-baby”

Adelusi described Daramola’s statement that the new high court complex, built and commissioned five months ago, was hybrid of absurdity that could not be put to use, as an after-thought and an exercise in futility.

“It is shameless Pull-Him-Down syndrome at work.

“Daramola was there at commissioning; he should have spoken there and then or is he a coward? Disparaging Fayose now is an act of cowardice. ”

Adelusi however said he was not surprised by what Justice Daramola said because the judge was sad that such high court complex for the state was built by somebody he hated with a passion.

“Justice Daramola has never hidden his displeasure towards Fayose, dating back many years. He had time and again allowed himself to become willing tool in the hands of some politicians to be used against the former governor. “

Justice Daramola was bitter and shed tears at the Oluyemi Kayode Stadium, Ado Ekiti on October 16, 2014, the day Fayose was being sworn in for second term because the former governor triumphed over all their conspiracies.

“Throughout the four years of Fayose’s administration, Justice Daramola never attended state functions personally and on the day when the foundation of the new high court complex was being laid, Justice Daramola openly expressed doubt of Fayose completing the project.

“In this regard, what does any right-thinking person expect Justice Daramola to say of one of Fayose’s legacy projects?

“When the project started, if truly he had noticed certain defects, why did he fail to point them out? Why did he have to wait till now? This, certainly, is not the act of a forward-looking person. It is without doubt an act of backwardness.

“Had this project been executed by the All Progressive Congress ( APC) administration whose interests Daramola leaves no one in doubt he represents, he would have commended it to high heavens.

“Justice Daramola will be well advised to please insulate himself from politics and allow Ekiti judiciary remain the last hope of the common man”, the statement concluded.