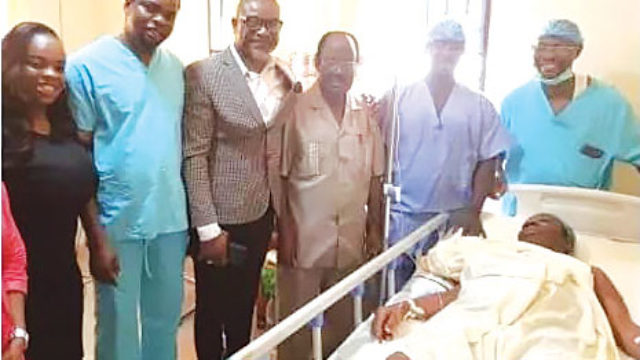 Thirty-nine years after they got married, Professor Samuel Otubusi and his wife, Ajibola remained childless but they kept on believing God. The couple held on to God’s promise of a child revealed to him in a dream after 35 years of marriage but was not fulfilled until five years later when the marriage clocked 40 years.

Last Saturday, October 20, Mrs. Otubisi gave birth to a bouncing baby boy at the age of 67. The husband is 72. Before then, the couple had sought medical assistance from within and outside the country without any positive result. The miracle baby was delivered at Atoke Medical Centre located at Ewang Estate Extension, Abeokuta the Ogun State capital under the expert hand of Dr. Taofeek Ogunfunmilayo, a Consultant Obstetrician and Gynaecologist.

Speaking with The Guardian, Ogunfunmilayo, explained that the old belief that a woman cannot give birth after reaching menopause is no longer tenable, saying, “One can always get pregnant even after menopause nowadays. There were lots of challenges during the delivery process and one of the factors responsible was her age. She has other health problems she has been coping with even before pregnancy and all these put her at risk but we were able to cope with all those challenges. She did not deliver normally but through CS.

“My advice to other couples passing through similar situation is that they should not limit themselves. She recovered very well after her delivery, despite her advanced age and we discharged her five days after delivery. To deliver someone who is not up to her age through CS is not an easy task. When she got pregnant, we advised her to rest because going up and down would have been disastrous for her.”

Speaking on how much it cost the patient from the point of pregnancy to delivery, Ogunfunmilayo explained, “She was registered during the promo period so the cost was low, about N800, 000 compared to the normal fee of N1.5 million. As at the point of delivery, the baby weighed 2.5 kilogrammes.

“The government should pump money into the health sector because if there are IVF centres in each geopolitical zone, I am sure the cost will come down because what is working against it for now is the cost which many cannot afford.”

He disclosed that the new mother has started breast-feeding her baby; and her age didn’t limit her.

Professor Otubusi, a retired lecturer of the Federal University of Agriculture, Abeokuta (FUNAAB) and his wife are staunch Christians. The husband is a member of the Deeper Christian Life Ministry while the wife is a member of the Mountain of Fire Ministry. All the church members that spoke were full of praises to God for giving them a “miracle baby.” Most of them said they never knew that she was pregnant until they heard of her delivery. Prof. Otubusi’s Pastor, David Darko told The Guardian, “I’m privileged to be Otubusi’s pastor for years now. I got to know that the family was childless, yet it never reflected on their attitude. Prof was very constant in church. His wife attends MFM but there is peace because I often visit them at home. One of our pastors called me last week when the news broke and told me that he never knew that they were childless because they have been active in the things of God.

READ  More photos from the dedication of Dunamis’ 100,000 capacity auditorium

A senior member in Deeper Life, Stephen Lawal, said “Everyone was happy when they heard the news and we are all looking forward to the naming ceremony today. Members of the church seem to have the opinion that God has rewarded them for their good deeds, which they persisted in, despite their challenge. Prof said 35 years ago, God revealed to him that he would have a child and he was going to name the boy, Oluwatobiloba and so he continued to encourage his wife and at the age of 67, she was willing to try again. I must commend the doctors because for this to happen in Nigeria, it means we have the solution that we seek in other countries.

The naming ceremony will take place today at the church’s premises in Abeokuta.

She Conceived At The Very First Attempt, Says Okewale

Dr. Babatunde Okewale (FRCOG), owner of St. Ives Hospital is the brain behind the laudable feat and first of its kind in Africa as he was the one that performed the IVF procedure that enabled the Otubusins get their bundle of joy. Professor Otunbusin and his wife who had been married for several decades have never had a child and had been to several places within the country and outside, seeking for help to no avail before landing at St. Ives where their heart desires were granted.

Speaking with The Guardian, Okewale said they have successfully carried out IVF for thousands of patients over the years and he was glad to be part of this admirable feat. “She conceived at the very first attempt at our clinic this year after several attempts at different hospitals in India and Nigeria. The risks involved in her pregnancy are normal risks associated with pregnancy in the elderly, including high blood pressure and so on. So, the onus was on us to confirm that she was in good health for the procedure and to make sure she had excellent antenatal care and delivery by a consultant obgyn in a well equipped hospital.”

Explaining that every pregnancy harbours risks to both mother and child irrespective of the age of the mother, Okewale said this is why antenatal care under an obgyn and delivery in a well-equipped hospital is advocated and desirable.

The process of IVF, according to him is an established assisted reproductive technique that has been in existence since 1978 and is being practiced all over the world. “Over five million babies have been born through IVF worldwide.”

Okewale added that there have been numerous cases worldwide of elderly women having children through IVF, “this just happens to be the oldest in Africa and second oldest in world.” On if there were any concerns about her age and health, he said, “Before we agreed to her request, we carefully considered her health and her other social circumstances parameters by our ethics team. It was a holistic decision reached by all concerned parties.”

Confirming to The Guardian that the first time mother was delivered by CS, he chose not to divulge if the eggs or sperm were donated to the couple.

“IVF as an assisted conception technique has come to stay despite the controversy in the earlier years. Couples trying for conception should avail themselves of the technology. The controversy on whether elderly women should be given the opportunity to avail themselves of the technology is also out there. Nobody questions an 80 year old man having babies left and right but want to control the reproductive functions of women and deprive them of their fundamental human right to have babies of their own in their lifetime if they want to; this shouldn’t be so.

There Is Currently No Law That Limits Woman’s Age For IVF, Says Ashiru

The joint pioneer of IVF in Nigeria, President of African Fertility Society (AFS) and Medical Director of Medical Art (MART) Centre Maryland Ikeja, Lagos, Prof. Oladapo Ashiru, told The Guardian that there is currently no law anywhere that limits the woman’s age for IVF.

“We congratulate the center. The issue was discussed on one of our fertility platforms and while many felt it was okay, some had reservations because of the various issues that would affect the baby growing up. They felt such would not be allowed in England. However others felt that here, we always view the arrival of a baby with joy.”

READ  Femi Adesina: The Dream I Had About Abba Kyari And My Last Contact With Him

Ashiru who is also an Adjunct Professor at the University of Illinois Chicago, United States (U.S.) said the World Health Organisation (WHO) is still trying to agree to a limit. “We will be meeting in Geneva, Switzerland in the first week of December to conclude all the fertility regulatory guidelines. A number of the participants are looking at the age limit of 52 years while African Fertility and Reproductive Health (AFRH) is considering 54 years.”

The fertility expert said there are factors to be considered:

1. United nations declaration is that having a baby is a human right issue, so anyone regardless of age has the right to have a baby.
2. Anyone about 50 years is medically and physically fit they can carry a baby. The first to do so was in Italy at the age 67 for her daughter.
3. In the age category the couple must consider the infrastructural support for the baby, and honestly there is no hard and fast rule.

He said at MART Centre, the oldest patient they treated is a 62-year-old nursing sister, who met all the medical clearance needed to carry a baby successfully. Ashiru further explained, “The couple who have been married for 30 years with no children are financially capable of ensuring a good life for the child. We also had a 58-year-old couple that lost their only son in a tragic accident and want to have another son. This issue of age limit is still very debatable and it depends on which side of the divide you are.”

Is it safe for a woman in her 70s to give birth? It is risky. The biggest worry is the possibility of pre-eclampsia, or high blood pressure, which can be fatal to mother and child. It can be caused by placental insufficiency, when not enough blood gets to the placenta to sustain the baby, so the mother’s blood pressure rises to try to compensate.