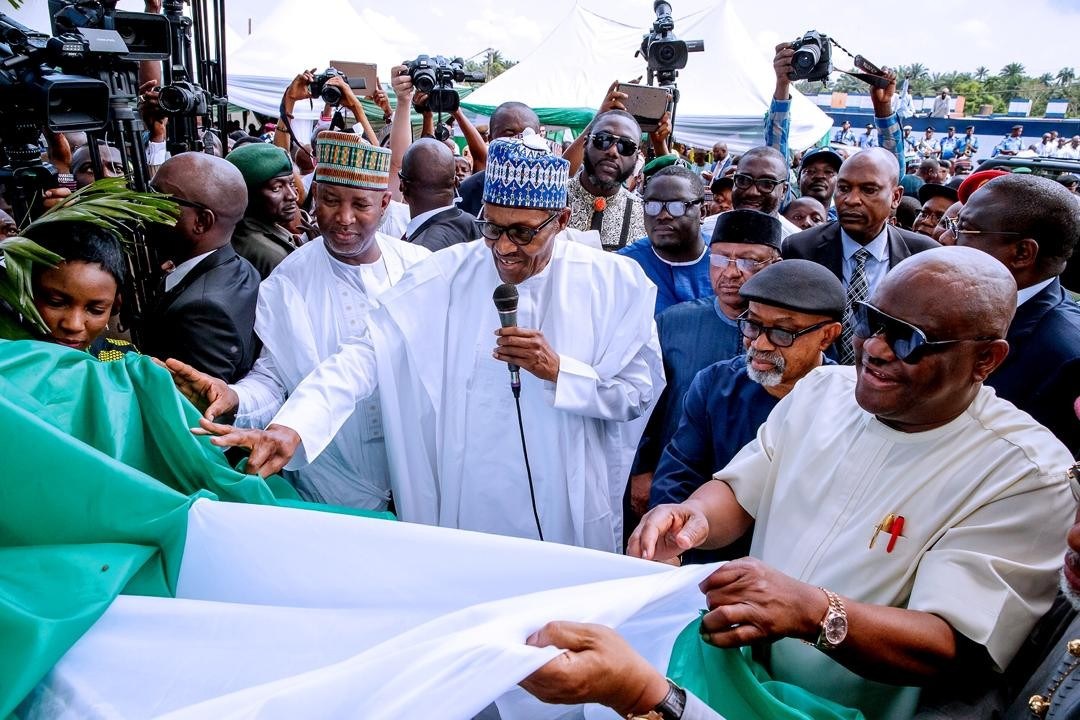 For Nigeria to benefit from its advantageous central location within West Africa and realise its desire to become a regional air transportation hub, it must upgrade its airport facilities, according to President Muhammadu Buhari. He spoke at the official opening of the new Port Harcourt International Airport (PHIA) terminal building in Rivers State yesterday.

The president, who was visiting Rivers State for the first time since he assumed office, apologised for the delay in the completion of the new terminal building built on 25,163 square metres. He said the opening of the facility was a significant landmark for international air travellers, particularly from the South-South region and the entire country.

Buhari explained that after the opening of the major airport terminals in the country in the late 70s and the early 1980s, not much was added to increase the passengers’ handling capacity of the facilities by successive administrations. And due to a large increase in national population, the capacity of the terminals became woefully inadequate to cater for the consequent surge in air passenger traffic.

He observed that although palliative measures were periodically taken, the facilities were fast giving in to the effect of wear and tear. To correct this anomaly, he said it became necessary to take a decisive action to ensure the terminals meet minimum internal standard for the travelling public.

According to Buhari, the construction of four new international terminals in Abuja, Lagos, Port Harcourt and Kano airports was embarked upon by the Federal Government with a view to modernising the aging infrastructure to meet global aviation standard, and improve service delivery in tandem with best international practice.

President Buhari further explained that the recent decision of the Federal Government to remove value added tax from domestic air transportation was in line with global best practices. This will make air travel more affordable and subsequently lead to the creation of jobs by air transport service value chain as well as increase revenue for the government.

The Minister of State for Aviation, Capt. Hadi Sirika, said the construction of the terminal, which commenced in February 2014, was funded through the China Export-Import Bank of China loan of $500 million with $100 million counterpart fund facility from the government of Nigeria.

According to him, the project, which was expected to have been delivered in two years, was below 30 per cent completion when President Buhari assumed office, and bedeviled by various technical challenges. Based on this, he said the president gave the ministry the nod to rectify all the discrepancies, subject to due process.

Sirika expressed optimism that with the new terminal and others to follow, Nigeria is well position to benefit from International Air Transport Association and International Civil Aviation Organisation projections that global air travel is expected to increase to 7.4 billion by 2030.

Governor Nyesom Wike said the people of Rivers State and the entire Niger Delta were happy over the completion of the terminal, as it would boost the economy of the state, and create employment for her people.

Wike said: “Rivers State is safe. Rivers is secure for people to come and invest. If Rivers is not safe, China Civil Engineering Construction Corporation (CCECC) would not have completed this project. I urge all of us who are from Rivers State, who are from Nigeria, to market the state well and not de-market it. Fear God, and keep his commandments: for this is the whole duty of man.”

Meanwhile, airlines’ operators have maintained that the dream of creating a Nigerian aviation hub will be difficult to realise without official support. They contend it is only the Federal Government that can make local airlines stronger and be able to compete with their foreign counterparts and reciprocate multiple Bilateral Air Service Agreements (BASAs) that Nigeria signed with several countries.

Currently, foreign airlines have about 80 per cent share of the Nigerian market, flying multiple destinations in the country. BASA provides for reciprocity by the number of flights and destinations reached by airlines. Nigeria, with the second largest market in Africa after South Africa, has at least 90 BASA pacts, with less than 20 serviced in return by the local carriers.

Chairman and CEO of Air Peace, Allen Onyema, said aeropolitics, that is “politics as conditioned by considerations of air power or its dominance” is the bane of the Nigerian carriers and indeed worse among African countries. Onyema, who owns and manages the leading local carrier, said Nigerian flag carriers had wrongly been “demonised” as lacking requisite capacity to compete, “forgetting the effects of resistance and bad politicking coming for the African neighbours”.He said “while Air Peace, for instance, has six international destination slots and 17 regional, there must be approval to venture, which has been very difficult.”

He gave examples. “Asky Airlines is doing four frequencies to Lagos daily. But their home country, Togo, said they would not allow us in because their government is protecting Asky. It took them a year to reply us. Later, they apologised when I threatened to go to court to stop their airlines from coming to Nigeria.

“Cote d’Ivoire gave us permission to fly into their country but not even an airport office was given to us, yet they slammed us with $10,000 charges. But how many people are you carrying on that plane? Are they (Air Cote D’Ivoire) paying $10,000 in Nigeria? Why is it that when we complained, we haven’t received any help?

“Air Peace has lost over a billion in just six months of flying the West Coast. When they presented this to me a few days ago, I almost cried. What we make are all spent on their charges. These airlines we are supposed to be competing with are receiving support from their governments; some of them are not even paying taxes. Air Peace, from day one, has started paying tax and charges. The truth is that those countries don’t want you to come and compete with their own airlines, whether private airline or whatever, they don’t want you to come.”

He said the indigenous airlines need the backing of the government in terms of slot negotiation, charges harmonisation and other strategies often deployed to frustrate Nigerian carriers abroad.

According to him, the recent suspension of the proposed national carrier has restored confidence in private airlines and government should complete the rounds by rallying behind the flag carriers to do Nigeria proud. The Chairman of the Airlines Operators of Nigeria (AON), Capt. Nogie Meggison, said the gross imbalance and insincerity of many African countries explained why his members were against both the Single African Air Transport Market (SAATM) and African Continental Free Trade Agreement (AfCFTA) initiatives, supposedly aimed at creating a single continental market for goods and services, with free movement of business persons and investments.