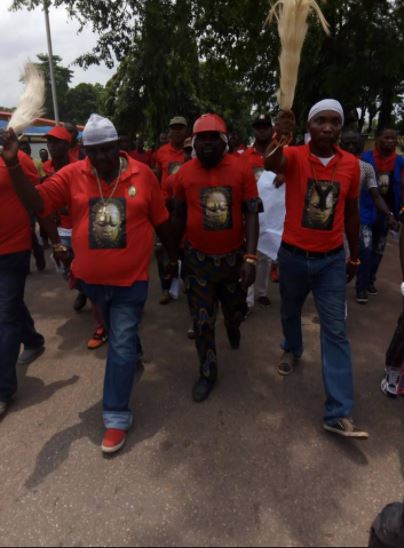 The Ijaw Youth Council (IYC) has said that it will only support a presidential candidate that promotes restructuring during the presidential election in 2019.

It also called on President Muhammadu Buhari to task the relevant agencies on the East-West road to release the funds required to ensure the rehabilitation of the road.

In a statement by the President of the IYC, Roland Oweilaemi, he noted that the road had become a “death trap”.

The statement read, “We want President Muhammadu Buhari to give directive to the Niger Delta Ministry and other agencies involved in facilitation of funds for the speedy completion of the East/West road that has become a death trap which claims innocent lives daily.”

On whom the organisation would support in 2019, the statement continued, “On the recent conclusion of party primaries, the Council congratulates the presidential flagbearers of the various political parties in the forthcoming 2019 presidential election on their emergence as candidates of their political parties.

“Generally, the IYC, which is the umbrella body that shields all Ijaw youth all over the world, will mobilise its members, friends, well wishers and other great men and women of goodwill to support any presidential candidate that supports restructuring of this great country that is currently being managed and run with resources from the Niger Delta, while our great people are treated shabbily with so much disdain.

“Our people have been totally sidelined and excluded from adequate and commensurate benefits that are supposed to accrue to the oil and gas producing communities and areas.

“Our stand on restructuring is very simple. Let the component and federating units control natural resources in their respective domains, and let them in turn pay royalty to the centre as practised by America and other advanced democracies.

“By so doing, our great people who have shouldered the economic burden of this country since the discovery of crude oil and gas at Otabagi-Oloibiri in Ogbia Local Government Area in Bayelsa State in 1956, will also have a sense of belonging as against the present situation where our people are wallowing in misery and abject poverty, while those who do not know the colour of crude oil are living in affluence.

“The IYC which is the mouthpiece of our great people will no longer support any government or leader that tries to pauperise or attempt to treat our people like second class citizens.”

The group also urged the Independent National Electoral Commission (INEC) to conduct “a free, fair and credible election in line with international practices”, just as it noted that the charge to INEC “has become very imperative because of the activities of INEC with respect to the Ekiti and Osun states elections, where INEC that is supposed to be unbiased and neutral became more partisan than the ruling party”.