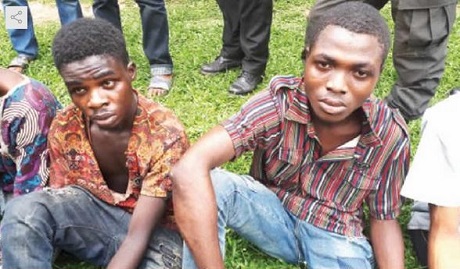 It was gathered that the suspected robbers had accosted the policeman in Oliha, Oredo Local Government Area of the state, where they robbed him.

Two men have been arrested by the Edo State Police Command for robbing a policeman and dispossessing him of his service pistol in the Oredo Local Government Area of the state.

The suspects were alleged to be members of a five-man gang who specialised in unleashing terror on unsuspecting residents of Siluko, Iriri and Ekenhuan axis of the state capital.

Southern City News gathered on Friday that the suspected robbers had accosted the policeman in Oliha, Oredo Local Government Area of the state, and ordered him out of his vehicle.

It was learnt that on sensing danger, the plain-clothe security officer, was said to have attempted to use his service pistol, but was overpowered by the gang.

The robbers allegedly made away with the gun. But two of them, identified as Emmanuel Oghenevo and Kelvin Aroiwa, were later arrested following a tip-off.

Oghenevo, who claimed to be a driver from the Isoko North Local Government Area of Delta State, said that the gang was surprised when their victim brandished a gun as they were ignorant of his identity.

He explained: “One of us, called I. Y., collected the pistol from the policeman and hit him on the head. As the policeman was coming out of his vehicle, he brought out his gun to shoot us.

“We did not know that he was a security operative. As he brought out his gun, I. Y. dodged and pushed him. Another member of our group, Emma, pinned his hand and took the gun.”

The suspect, however, alleged that he was pushed into crime by poverty and the hardship he was going through.

“I started robbing early this year. But I have not killed anyone. My family was suffering and there was no other way to feed. So, I decided to join the gang. I am not happy about my arrest and I advise those involved in crime to desist from it. If I am forgiven, I will leave robbery and join the police,” he said.

But Aroiwa, who claimed to have been under the influence of alcohol when the crime was committed, told Southern City News that he was arrested by policemen at his hideout in the Aduwawa area of the Benin metropolis.

The native from Odighi community in the Ovia North-East Local Government Area of the state, said: “We were at Ring Road (in Benin) when one of us told us to go to Oliha. I told them that I was drunk and would not be able to go. But they insisted. So, I followed them. I did not even know when we got to Oliha. To say the truth, I did not even know when they collected the gun from him (policeman).

“As we were driving out, they woke me up angrily and told me that they had collected a pistol. We later went to Ekenhuan road where we robbed another man. I was at Aduwawa smoking when the police arrested me and took me to a police station.”

However, the Commissioner of Police, Mr. Johnson Kokumo, assured that the suspects would be arraigned in court at the end of the investigation.