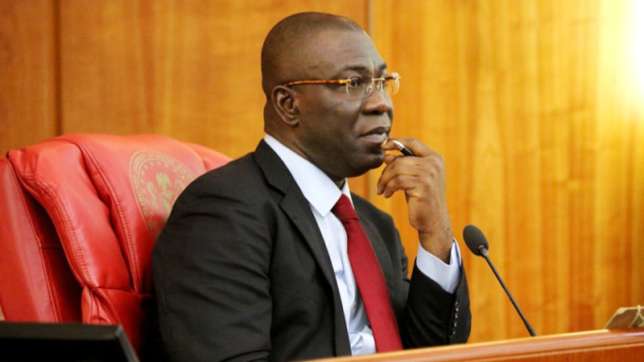 The Deputy Senate President, Ike Ekweremadu has condemned the siege on his home by security personnel.

Men from the Economic and Financial Crimes Commission (EFCC) and Department of State Services (DSS) blocked the Deputy Senate President from leaving his house on Tuesday, July 24, 2018.

Also, the Senate President, Bukola Saraki’s convoy was stopped by policemen near his house.

“We anticipated that a number of our colleagues in All Progressives Congress (APC) would defect and join People’s Democratic Party (PDP). In anticipation of that, the APC leadership had tried to stop them. When that didn’t happen, the first thing they did was invite President of the Senate to come to the Police. They believed that once the President of the Senate goes to the Police, I would be the one to preside and probably give effect to the letter of defection.

“In anticipation of that, the Police, EFCC, and other security agencies came together, about 200 of them, to stop me from going to the national assembly. They said I should come to the EFCC to give explanation over the things I was accused of. I agreed to follow them even though there was no prior invitation, but they were not eager to let me go to answer the invitation.

According to Daily Post, Ekweremadu said the siege on his house and that of the Senate President is bad for democracy.

READ  See What Adeleke Said About His Victory At The Tribunal

The Deputy Senate President also called on Nigerians to rise up and condemn the act.

“This is not good for democracy. We must respect the law, respect institutions because that is the only way we can make progress as a nation. This is total embarrassment to our nation. I hope this will not happen again.

“I am very worried. This is a decline in our democracy. I want to call on the media and Nigerians to stand up for Nigeria and ensure we save our democracy.

“This is a dangerous development. The whole world expects Nigeria to lead in democracy in Africa. We need to make progress and show the world that Nigerians are indeed leaders in every aspect of life.